Dano
This is all about my transition from an American lifestyle and culture to my newest adventure, life in Spain, in the city of Palma on the island of Mallorca in the middle of the Mediterranean sea!! I moved from the USA to Cuenca, Ecuador, South America and lived there for 7 years before moving here to Spain in early 2018. To read about my adventures in Ecuador, check out my other blog "Ahhh Cuenca!!". I'll be recapping some of my day-to-day experiences (and mishaps) to highlight what it's like to live in Europe....across the pond.

Here's some of my impressions of Valencia: 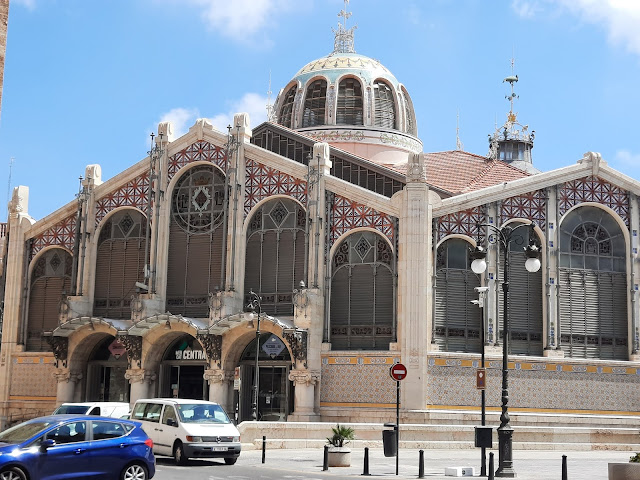 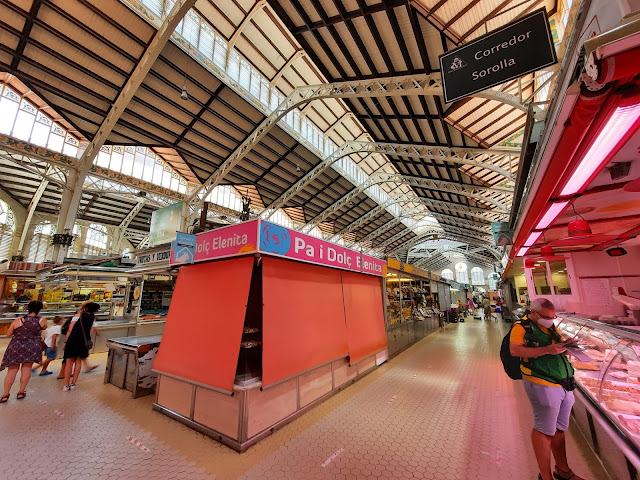 I noticed the church next door, Iglesia de Sant Joan del Mercat, was open that wasn’t the day before.  I went in and purchased a ticket packet that covered 3 places, one of which was for the church of San Nicolás de Bari y San Pedro.  I later discovered it was closed today which was good as that’s where I was headed next.

In lieu of San Nicolas, I opted to go to the city hall square to see the city hall itself and the post office building as I read they were pretty interesting.  The main train station was just a block away, so I checked that out, too.  Great architectural gems of Valencia as you'll see in the photos and video. 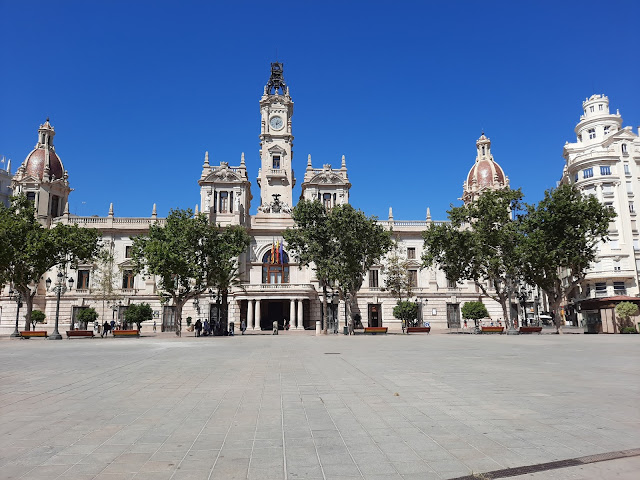 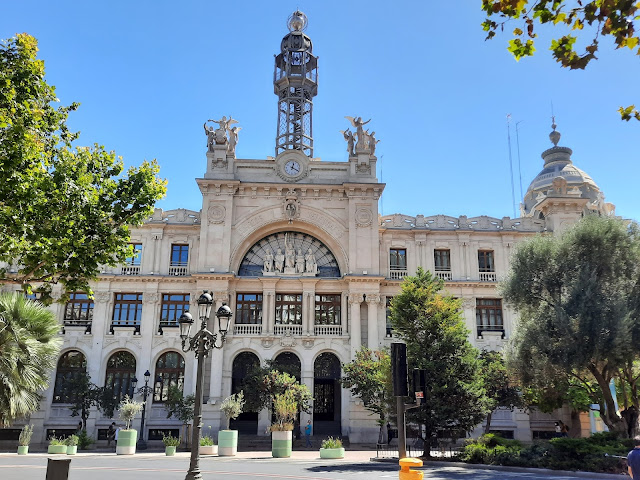 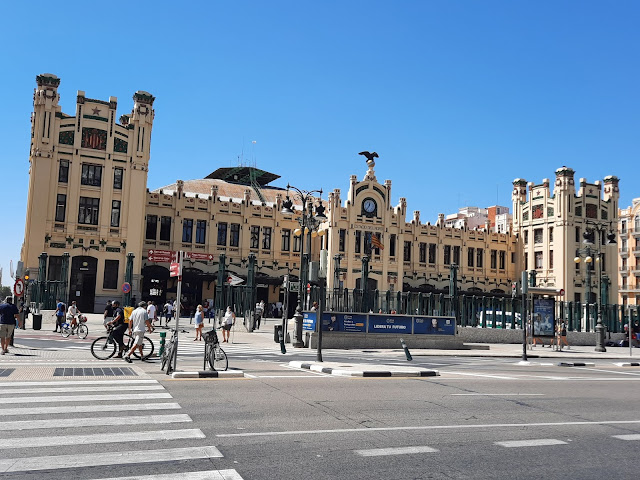 Valencia is known for its beautiful ceramics.  I wanted to go to the Museum of Ceramics but, guess what, one was closed that day and the other closed at 1pm so I decided to have lunch and go back to my apartment.

Because of my knee, I utilize elevators whenever I can.  Coming up out of the subway, I grabbed an elevator to avoid the stairs-only exit.  It went up....half way....and stopped.  I waited.  Nothing.  It was 90 degrees outside and hotter in the elevator.  I pressed the intercom button.  No one responded.  I pressed the alarm button and heard it ring.  I waited.  Nada.  I kept ringing the alarm button at regular intervals.  No response.  I called 112 (like 911) from my cell and they said they would send someone to "rescue me".   I thought I would soon hear sirens, but they apparently contacted an elevator technician and sent him my way.  Within a few minutes, someone was on the speaker asking me if I was okay (several times) and soon I heard voices below me which meant someonee was working on getting me out.  Ultimately, they must've activated some sort of override as my car was lowered a few inches at a time until I reached bottom and they were able to open the elevator door. 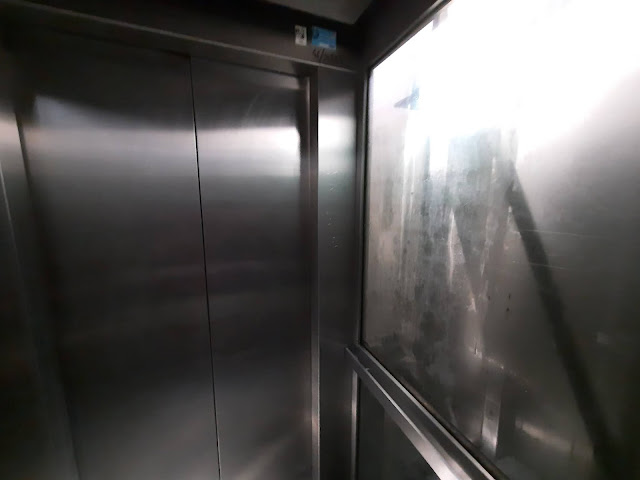 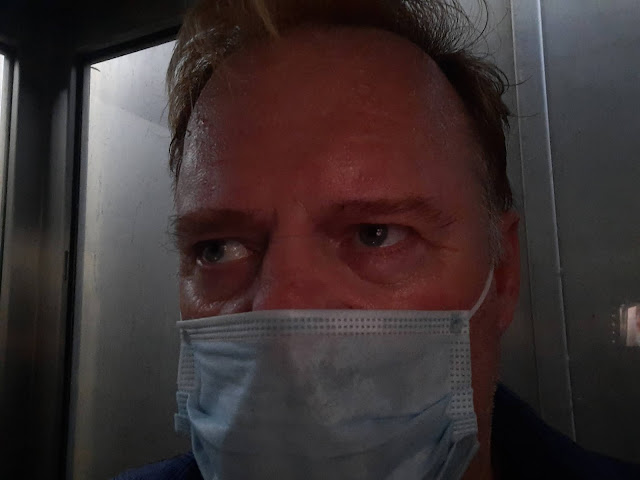 I was soaked with sweat from being trapped in that tin can for a half hour!  Apparently, there was a power outage that caused the problem.  After a few chuckles, I was on my way.
Another FIRST for me!  Mark 'trapped in an elevator' off my bucket list!!!  👍
Tuesday 8/18 Day 5:
Once again, I tried to see some ceramics.  Some places were only open til 1pm so I had to move fast.  I took the 150 bus 30 minutes to the outskirts of Valencia to a ceramics store that SAID they were open until 1pm.  After I got off the bus, I walked about 8 blocks in the hot sun to their location.  They were closed.  I was there at noon.
Instead of taking the bus back, I walked a long way to the train station and rode it back into town then hoofed it (a few times the wrong direction) to see the San Juan del Hospital church which was due to close at 1:30.  I arrived at 1:20, exhausted, and saw a sign on the door stating it closes at 1pm.  Google was wrong.  Or was it?   I later discovered I was at the front door of Església de Sant Tomàs y Sant Felip Neri church…San Juan was another 75 ft away!!!  Who’d thunk two churches being right next door to one another!!
Oi Vey!!!
Tired and frustrated, I went into a cafe across the street and had a great chicken burger, then walked about 8 blocks to Corte Ingles to buy groceries.  No way was I going to lug the groceries back to the apartment, so I grabbed a taxi.
Wednesday 8/19 Last Day
After cleaning my host's apartment, I took the subway to the airport to head home.  To my surprise, and delight, I was flying home on a turbo-prop ATR 72 airplane which seats only 68.  Cool beans.  I love propellor airplanes!!!
So glad to be back home and feel the Med breeze!!!
I hope you enjoy this 11 minute video of my last few days in Valencia!   Just click on the video image below, then select 'full screen'.
Or click this link:  https://youtu.be/rziVhcosN3g

Stay Tuned...
Who knows what I'll blog about next!!!
I know I certainly don't!!!
Dano

By the way, if you're interested in viewing any of my past entries about travelling around Europe and where I live in Mallorca, simply scroll down past my signature to the end.  There, you'll see 'Blog History'.  You can click on any Month/Year to see the titles I published at that time.  Simply click on the title you're interested in and it will take you to that page.
By Dano at September 26, 2020 No comments: